Please join us in looking back at our biggest achievements and defining moments. 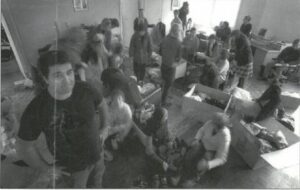 THE ASRC IS FOUNDED

As the Tampa Crisis unfolds, the ASRC Foodbank opens in Footscray to provide essential food and supplies to people seeking asylum. 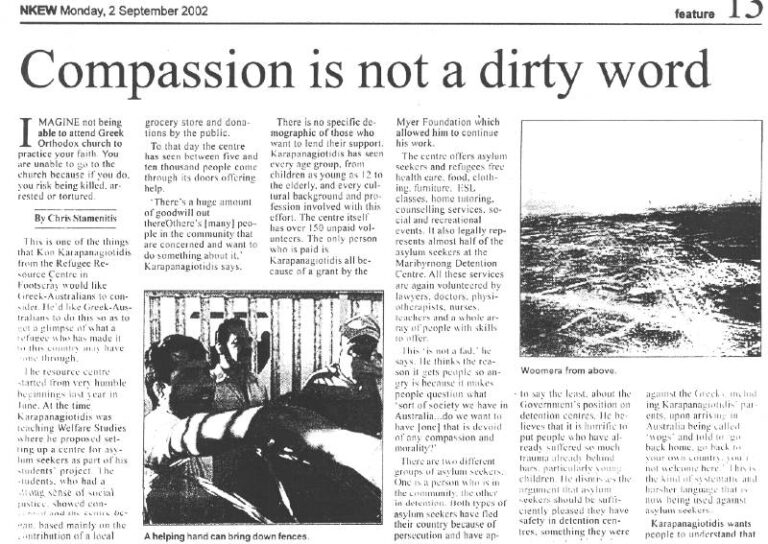 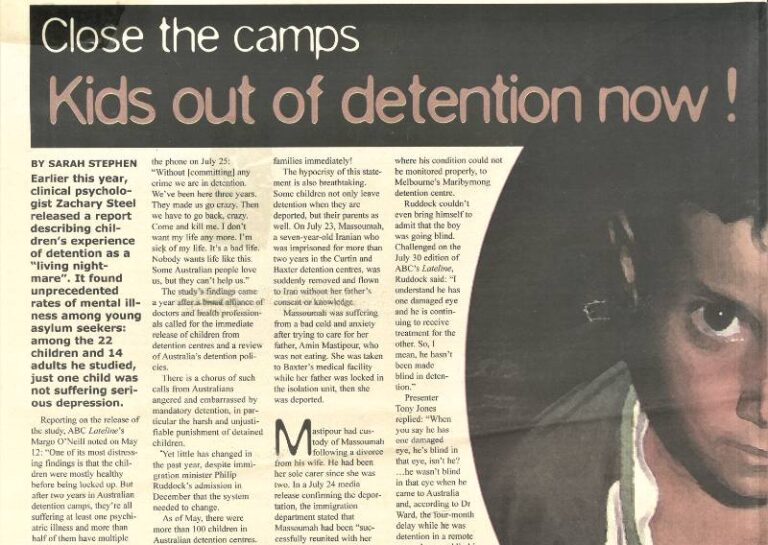 In only its third year, the ASRC is already supporting 1000 people seeking asylum in various ways, while also commencing a Counselling Program and an English Tutoring Program. 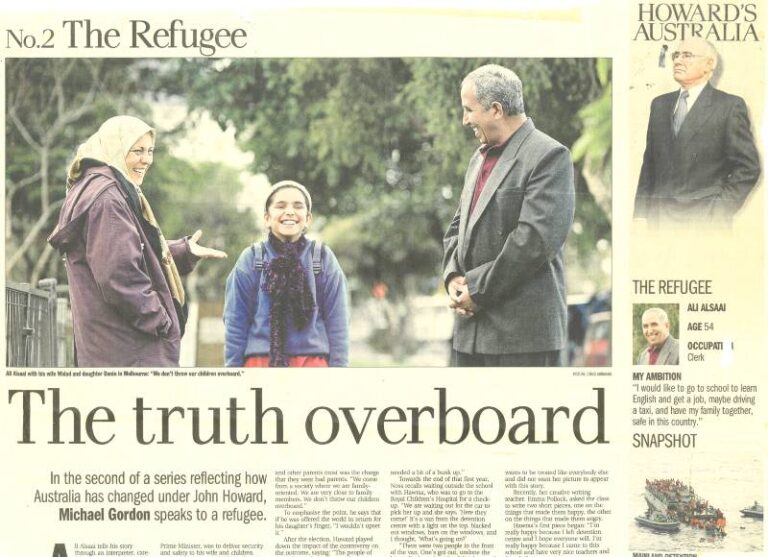 THE ASRC TRIPLED ITS SIZE

A big year for the ASRC as both the West Melbourne and Thornbury centres are opened, the Employment Program begins and plans are developed for a Community Care Program. 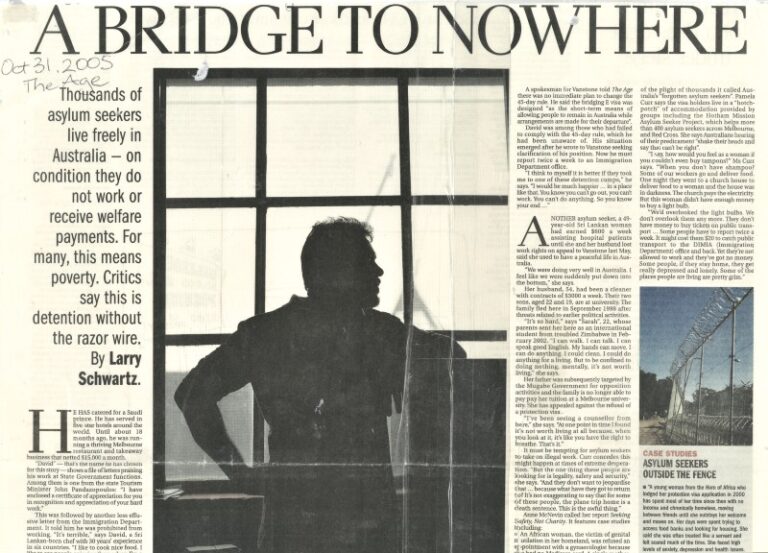 Asylum Seekers without access to Medicare are given Public Hospital access and hundreds of asylum seekers are released from detention into community settings. The ASRC completes its ‘Dumped at the Gate’ Report, while opening ASRC Catering and beginning the Detention Rights Advocacy Program. 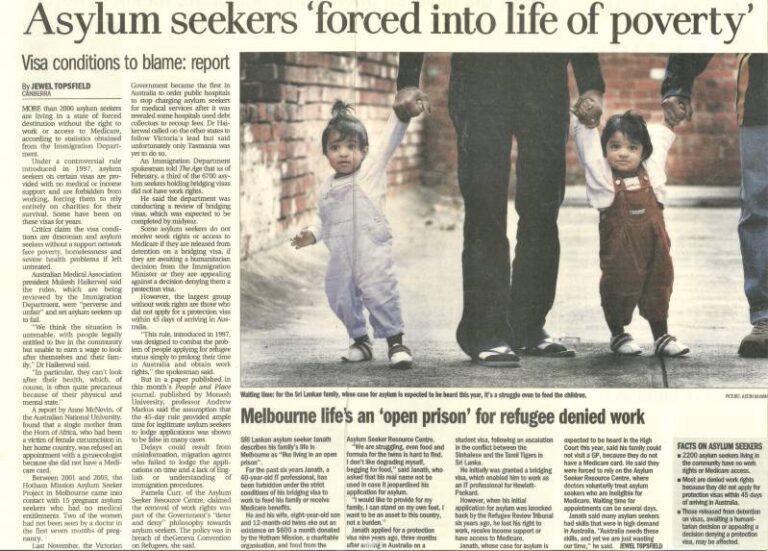 The ASRC Foodbank is redesigned to allow for a supermarket-style of access for members at the Footscray Centre. 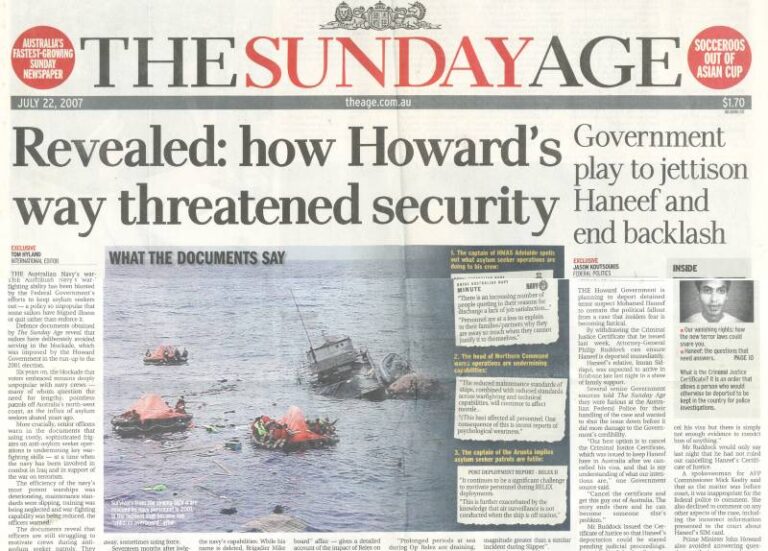 In 2007, the ASRC moved to West Melbourne and is now supporting more than 5000 people seeking asylum. Australia’s offshore processing regime ends and ambulance services are provided free for asylum seekers experiencing medical emergencies in Victoria. The ASRC also held a sleep-out protest at the Department of Immigration and Citizenship. 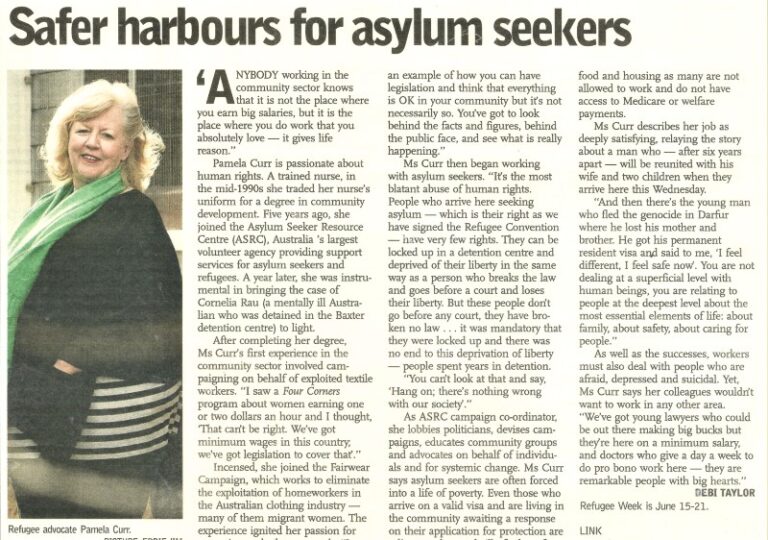 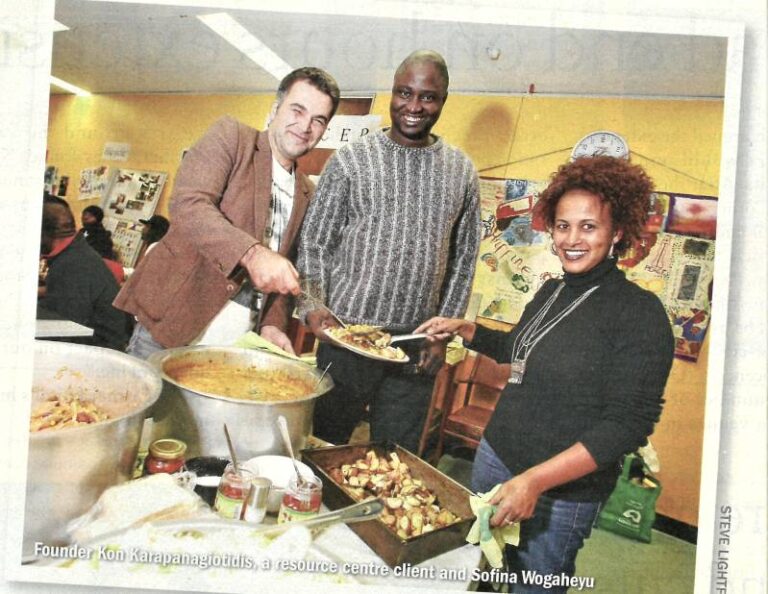 THE END OF UNFAIR PRACTICES

2009 saw the end of Detention Debt and the end of the 45 day rule which denied health care and work rights to people seeking asylum. The Nauru and Manus Island Detention Centres close and the ASRC begins its Orientation and Mentoring Programs. 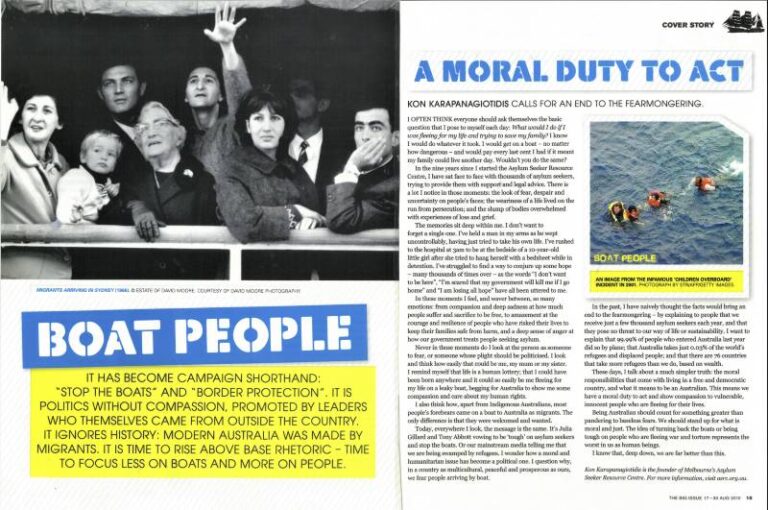 ASYLUM SEEKERS IN THE COMMUNITY

Public transport concessions, as well as 300 TAFE places are provided for asylum seekers, with minors and families being transferred from immigration detention to community-based detention. The ASRC holds a theatre production of ‘Journey of Asylum’. 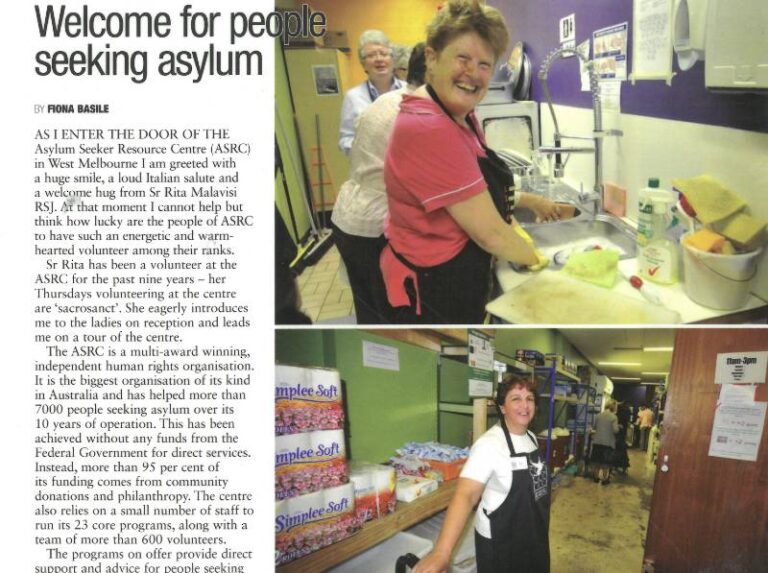 ASRC CEO Kon Karapanagiotidis was awarded the Order of Australia Medal in 2011, at a time when the ASRC is supporting over 7000 people seeking asylum with 1000 members. The ASRC’s 25 programs are supported by 25 full time staff and 750 dedicated volunteers. 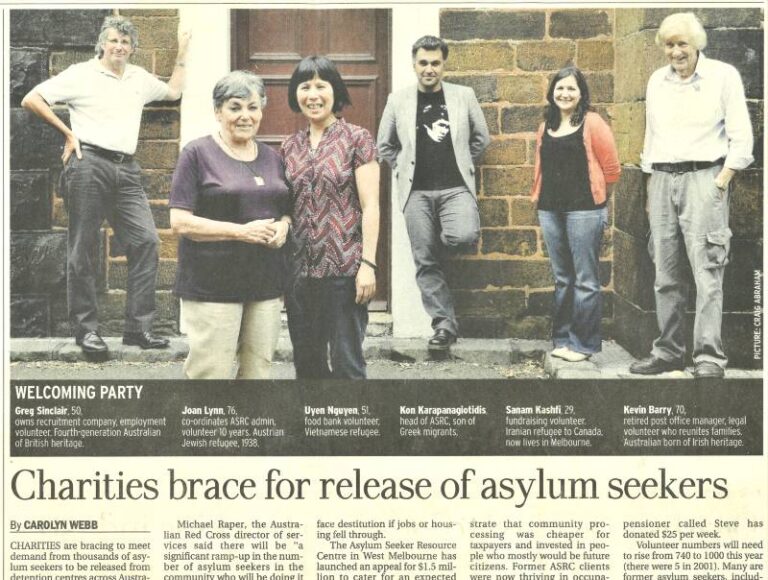 Offshore Processing reopens as the first transfer of people to Nauru and Manus Island occurs. 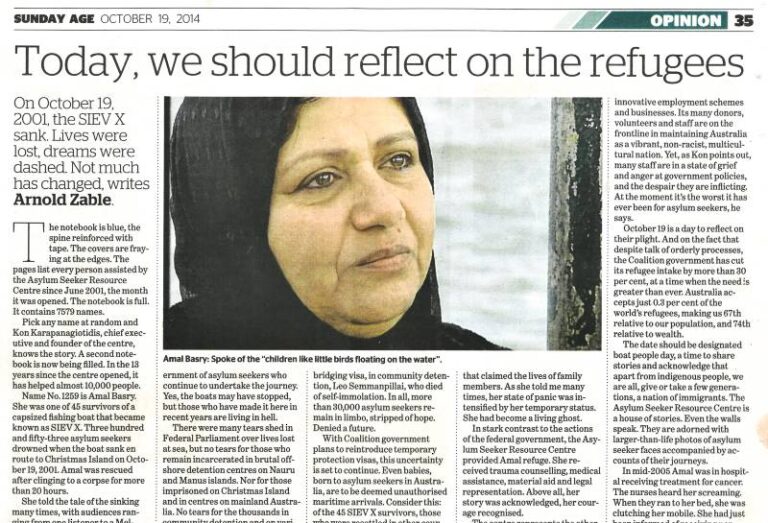 In 2014, the ASRC moved its operations back to Footscray. As demand increases, the ASRC’s Human Rights Law Program recruits more lawyers, while the Advocacy and Campaigns team fights for systematic policy change. Legacy Caseload legislation passes, leading to the establishment of Fast Track processing, the removal of any reference to the Refugee Convention in the MIgration Act and re-introduction of temporary visas. The Australian Human Rights Commission launches an inquiry into children in detention. 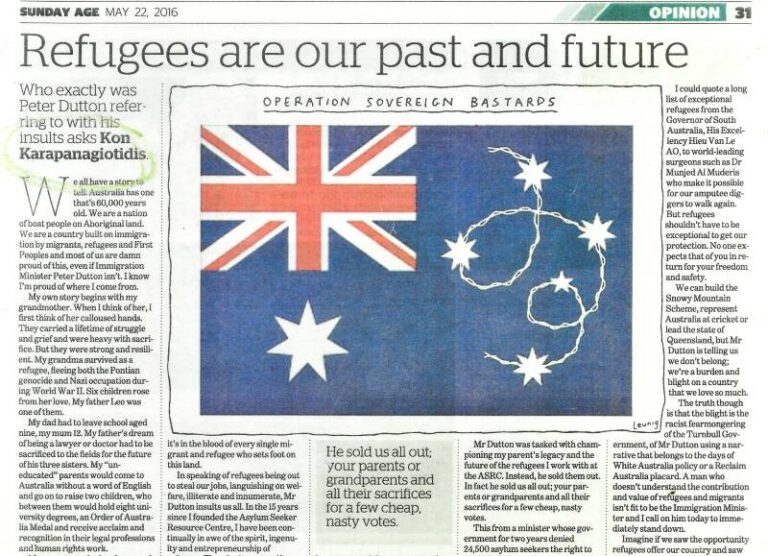 OUR SPOTLIGHT ON THEIR EXPERIENCES

The Detention Rights Advocacy program is formed as the ASRC visits Christmas Island and begins to offer casework management, crisis intervention and individual advocacy for people in onshore and offshore detention. The ASRC also collaborates on a report detailing the conditions at the Christmas Island detention centre. The #LetThemStay campaign, led by the sector, is a win for community mobilisation, resulting in baby Asha and her family being moved into the community. 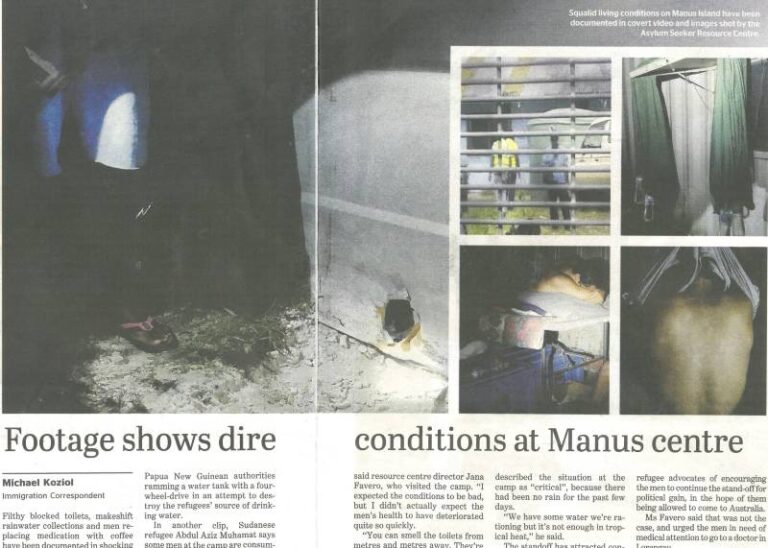 In response to the Fast Track deadline of October 1, the ASRC rallies to lodge Temporary Protection Visa applications for over 100 people seeking asylum who had arrived in Australia by boat. In the interim, the majority of people impacted have their SRSS privileges removed. 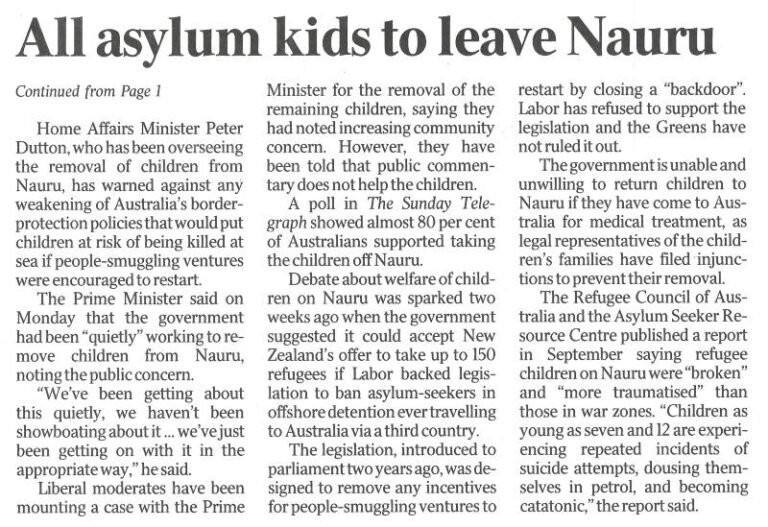 The #KidsOffNauru Coalition was formed as over 170,000 signatures were received on an open letter to Parliament with a petition asking for a response to the medical emergency unfolding on Nauru. This results in 349 people, including children and families being safely evacuated from Nauru. 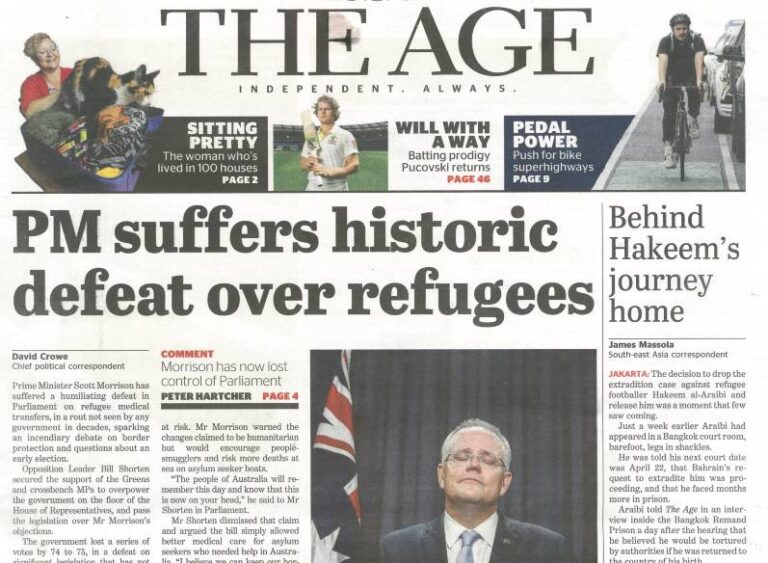 In 2019, the ASRC received the ​​Special Recognition Award from international not for profit, Blueprint for Free Speech, for its advocacy work exposing the Australian Government’s mistreatment of people seeking asylum held in off-shore detention.

8 YEARS WITHOUT A HOME

The #TimeForAHome Campaign was launched in a year when the ASRC helped to block the Migration Amendment Bill, which prohibited items in immigration detention facilities. At any one time, the ASRC is providing 50 immigration detainees with intensive one-on-one help and more than 600 people seeking asylum were helped through the ASRC’s Detention Rights Advocacy Program.

2021 marks the 20th Anniversary of the ASRC, which provides support to over 7000 people seeking asylum through 40 different programs, supported by over 1000 invaluable volunteers and over 100 staff members. The 20th Anniversary on June 8 was followed by the Canberra Convergence to send a powerful message to the Australian Government that a real solution is needed for people seeking asylum in Australia.

Thanks for your interest in supporting the ASRC Telethon on World Refugee Day, Monday 20th June.